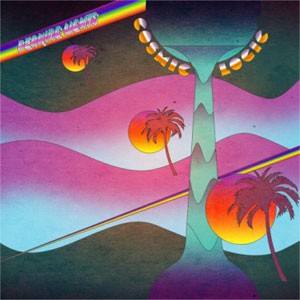 When we last heard from Aaron Coyes and Indra Dunis, it was early 2012 and they had just released their third full-length album, the fuzz-dub brilliance of "Lucifer". That album led off with "Beautiful Son", a piano-laced paean to their newborn son. Two years down the line and just like their inquisitive toddler, Peaking Lights are into everything! Shimmering and resplendent, "Cosmic Logic" is teeming with dance grooves that draw on influences as diverse as Jamaican digital dancehall, cosmic Italo, Chicagan acid, Afrobeat, Zamrock, early West Coast hip hop and disco. In fact, if you closed your eyes you'd be forgiven for thinking this eclectic tribute to all things dancefloor was a vintage DFA release. It's fitting then that our favourite husband and wife duo were ably assisted by former LCD bassist and undercover Mancunian Matt Thornley.

The success of "Cosmic Logic" is the ease with which Aaron and Indra have filtered these new-found influences through the unmistakable Peaking Lights prism, never losing sight of their own identity for a second but merely allowing the natural progression in their evergrowing sound; the lo-fi fuzz of their earliest albums now replaced by a bright, joyous pulse. The multicoloured sleeve is the perfect reflection of the kaleidoscopic sounds within, as the warm new wave of album opener "Infinite Trips", gives way to the Space Lady synth pop of "Telephone Call", bubbling Italo of "Hypnotic Hustle" and synth funk of "Everyone And Us". Each track introduces fresh ideas, which are expertly worked into the band's rhythmic aesthetic, resulting in a constantly surprising LP which still sits perfectly as a whole.

Andy says: Peaking Lights blow the fog away from their sound and reveal themselves to be a joyous mix of On-U Sound dub (which we already knew) and now DFA disco (which we didn't!) It's skewed pop and it's great!