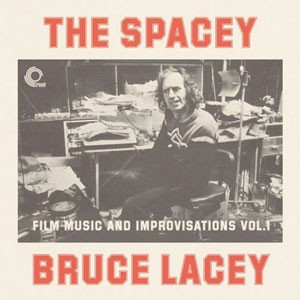 This is the first time his extraordinary music has been released. CD in jewel case with large 16 page booklet, full colour rare photos, essay by Will Fowler. Compiles tracks from the ' Volume One' and' Volume 2' LPs.

Bruce Lacey is the quintessential British eccentric. Bruce Lacey is an artist, a musician, a filmmaker, a shaman, a genius and visionary. Since the 1950s he’s made film, music, art and performances, and collaborated with everyone from the Beatles to Throbbing Gristle.

He was part of the groundbreaking Cybernetic Serendipity exhibition in 1968. He even built a robot that won the Alternative Miss World.

Made and recorded using household objects as well as a modified synthesizer (made by a schoolboy in the early 1970s), it ranges from abstract tribal concrete to droning electronic trance. The music will be released across two separate LPs and one CD. Included will be a fine essay about the history of this inspiring figure by BFI / Flipside archivist Will Fowler.

Bruce Lacey has been a busy man. Since the 1950s he’s been making film, making music, making art, sculpture, rituals, performances and more besides. Many of his films have explored the basics of life and sex all with a sprinkle of irony, realism and ritualism. Many of his films have required music, music which Lacey made himself, improvising with bottles, rattles, typewriters and a tape machine.

By the early 1970s Lacey was exploring stone circles and ancient rights; he’d also bought a home-made synthesiser from a schoolboy who’d advertised it in Exchange & Mart. He’d made it as a home project. A week later Lacey bought a keyboard from another schoolboy in Exchange & Mart. Lacey set about slowly modifying this synth and improvising music influenced by his stone circle visits over the next few years.

This music is made only when “The Muse” descends. It is impossible for Bruce to perform this improvised music live. The music he made was occasionally available on cassette at his exhibitions in the 1970s. The late Poly Styrene (who had a copy) compared Lacey’s music to Tangerine Dream. Lacey had not heard of Tangerine Dream. This is the first time this raw and extraordinary music, by one of the UKs most extraordinary men, has been made available.