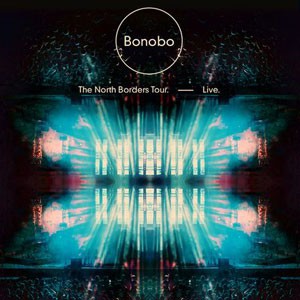 Since April 2013 Bonobo has travelled 180,000 miles and played live to over 2 million people at 175 shows in 30 countries as part of the epic career-defining tour around his latest album ‘The North Borders’. To document and celebrate this feat in all its glory, Ninja Tune present ‘The North Borders Tour: Live’. This special live release celebrates the tour ahead of the final ‘The North Borders’ show at Alexandra Palace, London in November 2014.

The album will be released as a deluxe CD and DVD set in deluxe packaging with a 72 page portrait sized hardback clothbound book in wibalin fine linen wrap with cyclus offset inner pages containing live photographs, Bonobo Instagram tour diary, anecdotes from Simon, the band and crew and a foreword by Gilles Peterson. The DVD contains 60 minutes of live footage taken at Pula Amphitheatre (a genuine Roman Amphitheatre and among the six largest surviving Roman arenas in the World) and The Roundhouse, interspersed with documentary footage and extras including photo gallery, extra videos and a time lapse video.