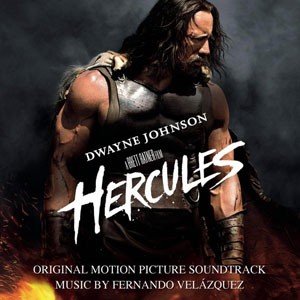 Hercules (2014) is a riveting adventure blockbuster directed by Brett Ratner and starring Dwayne Johnson (aka The Rock), Joseph Fiennes, John Hurt and more. It is based on the graphic novel Hercules: The Thracian Wars.

The film was a pleasant surprise to critics. The chief film critic for Variety wrote: “it’s a grandly staged, solidly entertaining, old-fashioned adventure movie that does something no other Hercules movie has quite done before: it cuts the mythical son of Zeus down to human size (or as human as you can get while still being played by Dwayne Johnson)” and further added that “[Hercules’s] strongest asset is surely Johnson, who continues to foster one of the most affable, guileless screen personas in movies today.”

The music epic, driving, classic and cool. All of these adjectives were used to describe the music desired by the creative team making Hercules. Composer Fernando Velázquez rose to the occasion and delivered a fantastic score. The recording sessions took place at Air Studios and Abbey Road Studios in London, with Fernando conducting the tremendous London Philharmonic Orchestra.