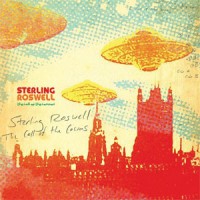 Fire Records are delighted to announce the addition of Sterling Roswell to the fold. The former Spacemen 3 drummer and multi-instrumentalist self-released and sold out of a limited run of 300 copies of the album earlier in the year to great acclaim, including a rave review in Mojo (as well as a pick by Andrew Weatherall in the same magazine) and it was album of the month in Rough Trade Shops who described the album like this: "Lavishing in pop structures but drawing in myriad influences to the wondrous black hole, The Call Of The Cosmos features some shimmering spaciousness but also sleazy exotica-themes, not unlike a Lee Hazelwood production infected with Joe Meek's ghost.

Roswell's own songwriting and voice recalls a solar-fried Bobby Gillespie, an artist he no doubt originally influenced with the Spacemen 3. Elsewhere, there's truly psychedelic excursions into outsiderdom which come off like The Seeds mutating ever larger into lysergic-dipped monsters." Any attempt to categorize Sterling Roswell, runs the risk of misrepresenting a true radical. Artist, musician, poet and producer, Roswell is all of these and more and over the years he has embraced a myriad of artistic forms to great effect. For the live shows he will be joined by the band The Psychedelic SRB featuring a rotating collective of musicians including the fantastic George Frakes (lead guitar), Syd Kemp (bass) and Tucker Nelson (drums). They not only bring the album The Call Of The Cosmos to the live stage but in the midst have created their own unique space age sound.

Live appearances, both solo and with The Psychedelic SRB, always hold audiences spellbound and is THE act to see in this new age of psychedelia. The Call of the Cosmos features the singles 'Interplanetary Spaceliner','Give Peace Another Chance' and 'a remix of The Girl From Orbit', cementing the elements which have infused Sterling's work since his days with Spacemen 3, his multi instrumental driving force behind The Darkside and his innovative psychedelic soundscapes as a studio engineer and producer. The album stands testament to a new message for Interplanetary Peace and features a truly fitting tribute to the late, great front man of THE SEED, Sky Sunlight Saxon with a cover of the song 'Tripmaker', which was originally featured in the Dennis Hopper and Peter Fonda movie The Trip in 1968. "Baudelaire once wrote, 'music excavates heaven'. Listen to this record and you might just have to agree." Andrew Weatherall / Mojo

1. Interplanetary Spaceliner
2. Give Peace Another Chance
3. The Girl From Orbit In Dub
4. Asteroid No. B – 612
5. Island Of Ether
6. Tripmaker
7. Outskirts Of Infinity
8. Counter Clock World
9. Time Is Of The Essence