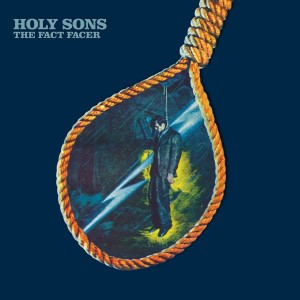 Holy Sons is Emil Amos, a musician whose chameleonic tendencies and technical versatility has lead to him becoming an in demand multiinstrumentalist as a founding member of Grails and Lilacs & Champagne, as well as a member of Om and a hired gun for Jandek, to name a few.

Holy Sons is at the centre of his many musical personalities and is his longest standing project, acting as an outlet for some of his most personal and direct songs. In Holy Sons, Amos puts his restless imagination to work using a variety of inventive home recording methods to turn melodic slowburners into multi-layered, atmospheric missives. While his methods and prolificacy provide a kinship with Sebadoh, Ariel Pink and other musicians who have offered countless transmissions from their bedroom floor, Holy Sons comes from the mind of someone who has internalized the minutia of 70s rock music and eschews the stereotypical lo-fi sound for a much deeper and more varied palate.

‘The Fact Facer’, his Thrill Jockey debut, bathes Amos’ thoughtful and even at times philosophical, songs in Technicolor darkness and reinforces Holy Sons as his musical centrepiece. The album is a collection of home recorded atmospheric slow-burners steeped in 70s rock with an experimentalist edge.

The songs on ‘The Fact Facer’ creep up on the listener, their fiercely addictive melodies unravelling slowly and purposefully. Jumping smoothly between many facets of Amos’ songwriting, the album does much to establish him as a talented multi-instrumentalist. From the lysergic leads of ‘Selfish Thoughts’ to the Danny Kirwan referencing solos of ‘Transparent Powers’ and the skilful acoustic flourishes of ‘The Fact Facer’, Amos proves himself as adept and creative a guitarist as he is a drummer. It is telling that Amos has built up two Holy Sons bands simultaneously: one based in Portland and one based in New York. Wherever the wind takes him, there are musicians willing to pick up their instruments and follow his lead.