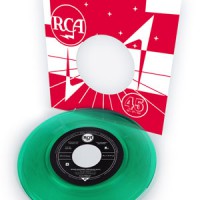 Originally featured in the Elvis movie (& soundtrack) Fun In Acapulco and released as a single in 1963, “Bossa Nova Baby” was recorded by Elvis with a legendary vocal group backing him up; The Jordanaires.

Another four years down the line, a large global beer company decided to feature the Viva Elvis remix for “Bossa Nova Baby” in one of their epic commercials.

This calls for an exclusive Elvis Presley 45 on beer bottle green vinyl, featuring both the original and remix of “Bossa Nova Baby”! Strictly limited to 1500 numbered copies. Party on!