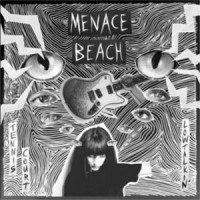 Having served notice of their intent with the ‘Lowtalker’ EP earlier this year, Menace Beach release a double A-side ‘Tennis Court’ / ‘Lowtalkin’ on Memphis Industries.

After several untreated breakdowns and a subsequent rash decision to relocate to Leeds, Ryan and Liza shacked up with MJ (Hookworms) to re-imagine their crackly 8-track demos. Joining them on the session were friends Nestor Matthews (Sky Larkin), Matt Spalding and Robert Lee (Pulled Apart By Horses), who fought their way through Liza’s rats nest of cables and homemade synth modules to blast through the songs during another all-nighter, having so much fun in the process that they all decided to stick around.

Both tracks were recorded, produced and mixed in the Spring of this year with MJ at his Suburban Home studios in Leeds. Friend of band Lan Mcardle of Joanne Gruesome was on hand to lend her admirably shouty pipes to both tracks (the line “with nothing in it” in ‘Tennis Court’, and the “lowtalkin’” yell that propels the track of the same name).

Where ‘Tennis Court’ shows off Ryan and Liza’s inclination towards fuzzed out, psyched up melody, ‘Lowtalkin’ is a sub-two minute blast of exhilarating noise.

Stereogum had this to say: “It’s been a while since I’ve heard old-school indie-pop that sounded quite this vital, and I suggest that you listen to the song…”