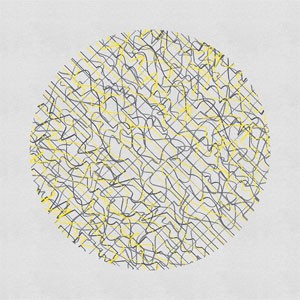 Continuing on from his Odyssey EP released in 2013, Ryan Lee West aka Rival Consoles creates atmosphere and space whilst exploring waves of sound and rhythm, and the power of colour. With Sonne Ryan creates music to structure itself around a pulse, rather than the pulse being the defining point.

The title track begins with “a very subtle set of melodies that repeat almost without confidence, and then gradually give way to a huge collage of colour and power”, as Ryan describes it. Not relying on a conventional beat, it’s a prime example of how an analogue synthesiser can create the power and momentum of a rhythm section. From the distorted waves in 3 Chords, growing and shrinking, to the rhythmic waves of constant speeding up and then slowing down in Recovery, it’s the Moog Voyager, Prophet and tape delay that make up the core sound of the EP. Whilst tracks like Helios, Haunt and Think Tank see West play live drums and acoustic guitar.

“I’m often looking at art in exhibitions and I always think to myself ‘why the hell don’t I have this much colour in my work?’ The answer in part I think is down to synthesis. It is very difficult to create colour without it sounding plastic. Colour in music is both the note combinations and the actual timbre of the sounds. There are lots of instances of very colourful ambient sounds, which I took great care to create for each song, using various methods – from passing analogue synths through chains of effects to chopping up random sequences of recordings and forming tiny collages." – Ryan Lee West

Resembling the colour and vibrancy in his music, the cover art was created by South London artist Supermundane, who was also responsible for the artwork of the Odyssey EP.

After supporting Luke Abbott on his recent UK tour and I Break Horses on their North American tour in spring, Ryan will debut his new live set with a special release show in London, followed by a string of West Coast U.S. dates culminating in Decibel Festival.

ABOUT THE ARTIST:
Some might be surprised that London based electronic producer Ryan Lee West, the man behind Rival Consoles, shares a home with contemporary classical composers such as Nils Frahm, Ólafur Arnalds and Peter Broderick. And yet they have a lot more in common than expected. Fascinated by sound from an early age, Ryan chose to dedicate his time to studying, experimenting with and producing sound graduating from De Montfort University in Leicester. One consistent element in his musical journey has been his desire to create a more organic, humanised sound. Ryan often drafts early ideas on piano, violin and guitar, although the end result is much more electronic-laden. As an accomplished sound designer he has repeatedly performed at the Tate, and recently created a bespoke audio-visual performance for Boiler Room at the V&A. Ryan is currently composing music for a BBC production.