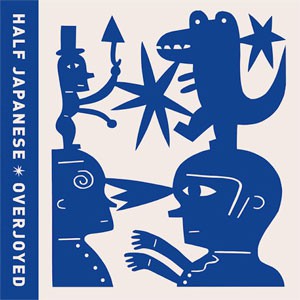 Announcing "Overjoyed", the first album in 13 years from legendary punk band Half Japanese. One of the most influential bands of all time, Jad Fair and Half Japanese spearheaded the DIY and Lo-Fi movements, influencing countless bands such as Sonic Youth, Neutral Milk Hotel, Daniel Johnston, and perhaps most notably, Kurt Cobain (who ranked Half Japanese amongst his top 50 favorites, had them open the "In Utero" tour, and was wearing their t-shirt when he died). Without exaggeration, Half Japanese is one of the most important bands in the history of music. "Overjoyed" was recorded and produced by John Dieterich of Deerhoof, and ranks amongst the best albums of the band's catalogue.

Darryl says: After 13 years away, Half Japanese return to the scene with 'Overjoyed'. And they prove themselves to be as vital as ever, melodic indie-punk that keeps them ahead of the pack.