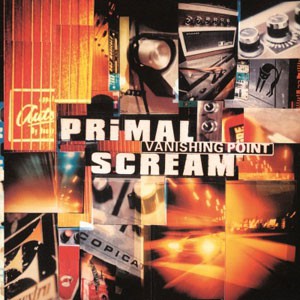 After a slightly disappointing album that explored tad-rock, Primal Scream returned to form in 1997 with "an anarcho-syndicalist speedfreak roadmovie record." They baptised it 'Vanishing Point', named after their favourite cult movie from 1971, and filled it with echoes of spy movies, cavernous dub, and '60s pop that created shoegaze mania that emphasized sound and groove. It was a triumphant return to the genre-bending electronic dance-rock and neo-psychedelica, but one with a heavier bounce to it than their seminal Screamadelica.

Bassist Mani from the Stone Roses joined ranks, added an organic funky foundation to Primal Scream's sound and ultimately saved the band. With contributions from Augustus Pablo, Glen Matlock, The Memphis Horns and a Darth Vader mask, 'Vanishing Point' is a throbbing album built on improvisation that works the rhythm into a psychedelic frenzy as rebellious as the film that inspired it.

Andy says: The album that SHOULD have followed Screamadelica. A dark, psychedelic, twisted beauty.