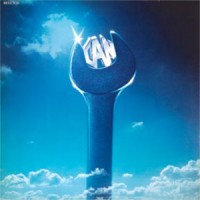 ‘Can’ was originally released in 1978. Lost on its initial release amongst the punk explosion, ‘Can’ features the classic ‘Sodom’ and ‘Can Be’.

The album sees Holger Czukay take more of a back seat and would be Can’s last album before they reformed one more time with Malcolm Mooney on ‘Rite Time’ in 1986.

All Gates Open
Safe
Sunday Jam
Sodom
Aspectacle
EFS No. 99 “Can Can”
Ping Pong
Can Be