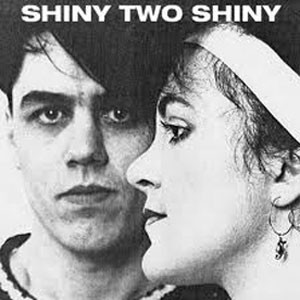 Gayna Florence Perry and Robin Surtees are perhaps best known for their work with cult Eighties band Shiny Two Shiny. Signed to Red Flame Records, they released one mini LP entitled ‘Halfway Across The Rainbow’ and one single ‘Waiting For us’ c/w ‘Ritual Hate’, in 7” and 12” formats. A mixture of bright and breezy synth pop with some darker undercurrents both records made a dent in the indie charts gaining positive reviews in the music press for releases and live appearances and acclaim from John Peel as well as daytime airplay on Radio 1. They also toured Europe and appeared on TV. At the start of 1984 the band played at the ‘Big Brother’ music festival at the ICA in London, supporting Pink Industry. But by this time the writing was on the wall for Shiny Two Shiny.