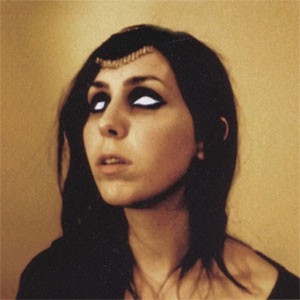 Chelsea Wolfe's sound is best described with broad strokes: elemental, intense, radiant, ancient yet modern, intimate yet expansive, dark and sparkling. Hues of black metal and deep blues inform her ever-evolving electric folk—a warm force that wraps itself around the listener, encouraging uplift, seeking triumph. Her voice similarly haunts and soothes, with words that illuminate life's darker corners in order to reveal the unlikely truth and beauty hidden within. Originally hailing from Northern California, Wolfe's formative years were spent tinkering in her country musician father's home studio, however, she long lacked the confidence to share her work. Then, in 2009, an overseas excursion as part of a nomadic performance troupe ignited her passion for performing and initiated a renewed interest in writing and recording. After performing in cathedrals, basements and old nuclear plants to whoever would listen, she returned home with a new drive. She began toting around an 8-track and recording as the mood hit, eventually editing her findings into a breathtaking debut album, 2010's The Grime & the Glow. Marrying the gentle intimacy of folk, the atmospheric voodoo of death rock, and the bleak, sullen nihilism of black metal, Wolfe's sound effectively cast a genre all her own: a cavernous rumble, marked by stuttering drums, ethereal synths, and a wash of guitar, all very much in the service of one of the most hypnotic, celestial voices in modern music. Described as both healing and harrowing, enchanting and narcotic, the album established Wolfe as a force on the rise.

Inspired, Wolfe then relocated to Los Angeles and recorded her second album, 2011's Apokalypsis, which found her in an actual studio with her live band. The songs captured therein maintained the strikingly visceral elements of her debut, further showcase Wolfe’s unique songwriting ability, while adding a serious heaviness of sound that balanced eloquently with her transcendent voice. Its release was subsequently met with critical adoration, and rightly landed on numerous best of 2011 lists.