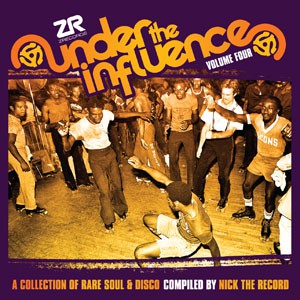 Z Records tap Nick The Record for their fourth volume of the 'Under The Influence' series. Packed to the brim with disco, boogie, electro-funk and tropical gems, it's another essential offering from Z.

"My whole life has revolved around records. I was buying hip hop and house in the 80s as it was released and I got heavily into tracing the steps back through breaks and sample sources that were used in hip hop records. I also joined the dots between disco and modern club and house music and spread my music explorations from rare groove to rare disco. There were very few people interested in this vein of music history at the time and even fewer as obsessed as me so when the reemergence of disco exploded I was well ahead of the curve, not only in collecting but historical knowledge. The best thing about record collecting is it never ends and after 35 years of buying, after 25 years of selling and playing records there is still old stuff to discover and new releases to endeavour to keep up with. So as something of an expert in all things disco I get quite a few offers to release compilations but as a record obsessive my natural hoarding mentality makes me cautious to give up the goods. I feel this 'Under The Influence' series offers the chance to put together a more personal comp, which reflects the many different flavours of my taste and my collection and gives you a feel of my DJ style at the same time." - Nick The Record