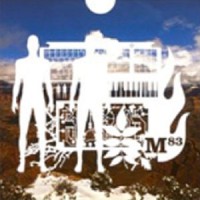 Aptly titled M83, this album served as the French electropop outfit’s debut release in 2001 on Gooom. Recorded as a duo by founding members Anthony Gonzalez and Nicolas Fromageau, the album was described by Pitchfork as “how it feels to live inside a triumphal music box.” The track names can be read in order to describe a boy/girl meeting at a party. Taken in tow with the sampled movie dialogue throughout, the album serves as a poignant soundtrack for the simplest of scenarios.

Four years on from the Grammy nominated, critically acclaimed release Hurry Up, We’re Dreaming (featuring platinum selling single “Midnight City”), French electronic act M83 re-issues their first three albums in addition to two digital EPs featuring remixes and B-sides from those albums. After several years of being out of print, M83 (2001), Dead Cities, Red Seas, and Lost Ghosts (2004), and Before the Dawn Heals Us (2005) will be released August 25th, 2014 on Naïve Records.

M83 has become a household name amongst music lovers due to extensive success across many formats. Since Hurry Up, We’re Dreaming, not only has M83’s Anthony Gonzalez scored two films: Oblivion (featuring Tom Cruise) and You and the Night (directed by his brother Yann Gonzalez), but his music has been used across a plethora of movies, television shows and commercials, most recently in films The Fault In Our Stars, The Vampire Diaries, and 22 Jump Street. Huffington Post even reported, “few recent albums have had a bigger impact on movie music than M83’s Hurry Up, We’re Dreaming.” At radio, M83 reached #1 on the CMJ charts, #1 at Commercial Specialty, and #5 in Commercial Alternative Radio, while receiving rave reviews from publications across the world, including Pitchfork, Spin, Entertainment Weekly, XLR8R, Filter, and countless others.