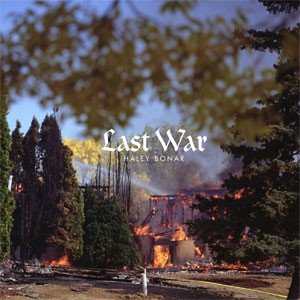 Haley Bonar releases her debut UK album, a nine track collection as relentlessly catchy on the surface as it is alluringly complex underneath.

Haley Bonar was first discovered by Low’s Alan Sparhawk who spotted her at a local open mic club in Duluth, Minnesota and was so impressed he immediately invited her to join them on tour. Which is how, a week later, nineteen year old Haley Bonar, was transformed from college student to ambitious dropout, crammed into a Honda Civic with a guitar and a drummer for company, touring the US opening for Low.

But there is more to this story. In the decade since Haley has released a succession of recordings, each of which have garnered more praise the last, and has seen her collaborate with the likes of Andrew Bird (with whom Haley occasionally plays live) and Justin Vernon (who features on the new album). That’s not to mention the company she keeps in a rotating cast of premium band members including Jeremy Hanson (Tapes ‘n Tapes), Luke Anderson (Rogue Valley), Jeremy Ylvisaker (Andrew Bird, Alpha Consumer) and Mike Lewis (Bon Iver, Alpha Consumer). Now, with her new album ‘Last War’ Haley looks set to find a wider audience.

Much of the joy of Bonar’s songwriting is in the tension between her sparkling melodic sensibility and her deeply ambivalent lyrics. Album opener ‘Kill the Fun’ positively crackles with traces of the Bangles and the Cure at their most pop, as Bonar chronicles her travels with a lover, taking some moments to reveal the nature of the relationship: "You'll be here till morning / You will get back on the plane / Go back to work / where you never knew my name." On ‘No Sensitive Man’ (which features the most Clem Burke drums outside of a Blondie record), she claims "I don't want no sensitive man / I don't want to talk." While on the captivating ‘Heaven’s Made For Two’ Bonar’s daydreaming vocal drifts ethereally as the instrumentation builds from stripped-back beginnings into a country-meets-shoegaze wall of sound crescendo.

On ‘Last War’, the complexities hit as hard as the hooks, a smart, careful balance achieved through equal doses of mystery and charm.