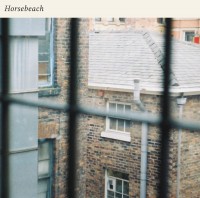 Ryan Kennedy has been making music ever since he was a young teenager. Now in his early 20's, his dreams and desires have finally been distilled into this, his debut album. Written over the space of a year, but recorded in a fortnight, straight to tape, in Ryan's central Manchester flat, 'Horsebeach' is a gorgeous journey through Northern, jangly, dreamy guitar pop. From as far back as The Wake, through the now de rigeur C86, this is bedroom introspection gone widescreen.

Gorgeous songs of love and longing, this music has a lilting, drifting quality, sometimes reminiscent of Felt, or of a meandering, jangle-tastic Real Estate, of whom Ryan is clearly a fan. Chiming guitars, brooding melodies, thoughtful words. 'Horsebeach' is a very lovely record indeed.

Andy says: ‘Horsebeach’ is a self-released, recorded-in-a-bedroom (but hardly lo-fi) labour of love by local lad Ryan Kennedy. With no press to speak of and just a handful of spins on 6 Music, the album managed to become the Piccadilly Records surprise smash of the summer. It is a gorgeous journey through old-school, jangly, dreamy guitar pop. From as far back as Factory Records' The Wake, via Felt, the DIY ethic of C86 and right up to the present day (the kind of wistful sounds heard on Captured Tracks) this is lovely, considered, melancholy music where guitars chime, words provoke, and melodies meander beautifully. There's quite a few bands mining this peculiarly English sound right now, most of them Stateside, and a first listen to Horsebeach could well put you in mind of the best of them: Real Estate. It's in the ringing, shimmering guitars and sense of longing, but it's also in a shared love that's not like any other love. This one is different because it's The Smiths! Nothing is implied, Kennedy's heart is emblazoned right upon his sleeve. It's been 30 odd years so why not? Geographically and spiritually it's there in his blood, so to jingle like Johnny and murmur like Moz is clearly the most natural thing in the world. The boy can't help it! That's probably what's made the album such a hit in our shop. That and an accidental kinship with the burgeoning Mancunian Balearic collective. The tranquil, breezy drift of a number of tracks coupled with those hazy echoes of Smithsonia. That gentle sound, coming round again.