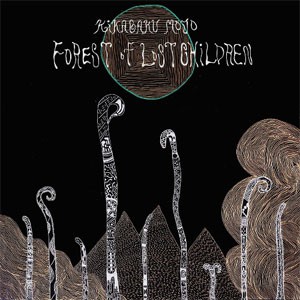 Record Label
Beyond Beyond Is Beyond

To anyone who has heard the music of Kikagaku Moyo, it should come as no surprise that the band’s origins lie in hours upon hours of late-night jamming, illuminated by nothing more than the geometric patterns playing behind the band’s eyelids, resulting in a natural, free-floating sound, as of-the-earth as it is intergalactic. It may be surprising that the band sharpened their improvisational skills by busking on the streets of their native Tokyo. It may be surprising that the band’s overall sound may owe as much or more to the Incredible String Band as it does to Acid Mother’s Temple.

But what’s perhaps most surprising about Forest of Lost Children, the band’s face-melting, recorded-ritual sophomore album, is how utterly centered and mature the band sounds, especially given their relatively short lifespan as a band. Boundless though they may be, Kikagaku Moyo here sound anything but lost, their child-like wonder manifested in a confident, courageous exploration of sound. Labels – psychedelic, folk, prog-rock, psychedelic-folk-mixed-with-prog-rock – do little to accurately reflect the spectrum of influences on display, let alone the more impactful realization of completeness in Kikagaku Moyo’s songs.

Easily one of the most shimmering crown-jewels in the rapidly expanding BBiB catalog, look for Kikagaku Moyo and Forest of Lost Children to be found taking shape in the expanded minds of listeners everywhere. - Ryan Muldoon.