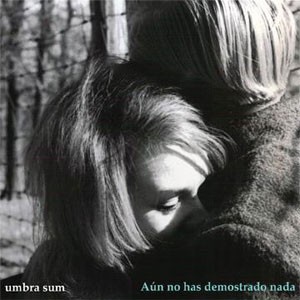 Umbra Sum is Ed Sánchez-Gómez, a Costa Rican expatriate. Following a love/hate relationship with classical guitar studies at the University of Costa Rica, Umbra Sum emerged in 2003 as a way of reconciling with the instrument. After leaving Costa Rica, Ed wandered around Europe and later Argentina, where he acquired a taste for the South American folk music that permeates his work. He left Argentina to study improvisation in Chicago, where he currently resides.

'Aún no has demostrado nada' is the first official release by Umbra Sum: an eclectic mini-album that has hints of the summertime harmonies of the Beach Boys, the psychedelic folk of Los Jaivas, the doleful spirit of Hood, and the melodious uproar of My Bloody Valentine and Dinosaur Jr.

In this debut album, harmonious noise, snaking rhythms and layered voices all serve as a chorus that creates a lyrical mural, hearkening to the heavens and earth: like a rudimentary yet well-made treehouse made of exotic woods, projecting out from within the dense Indie-Rock forest that surrounds us.

'Aún no has demostrado nada' was recorded by Ed Sánchez-Gómez in Evanston, IL; mixed by Joel Jiménez-Cabezas in Goshen, IN; and mastered by Jeff Lipton (Arcade Fire, Bon Iver, The Magnetic Fields) at Peerless Mastering in Boston, MA.