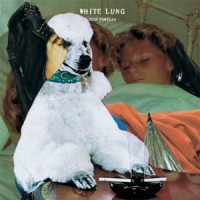 Resilient and hard hitting rock ‘n’ roll outfit White Lung are set to release their third album ‘Deep Fantasy’ via Domino. The band is every bit as confrontational as before but they’ve managed to open their sound up just enough to draw listeners in before kicking them in the face (in a good way).

‘Deep Fantasy’ was made primarily in Vancouver with producer Jesse Gander (who did both ‘Sorry’ and their 2010 debut ‘It’s The Evil’) in just two, ten day-long sessions at the end of last year and the start of this one.

Vocalist Mish Way is more provocative and melodic than ever on ‘Deep Fantasy’, surveying lyrically addiction (‘Drown With The Monster’), body dysmorphia (‘Snake Jaw’) and sexual dynamics (‘Down It Goes’).