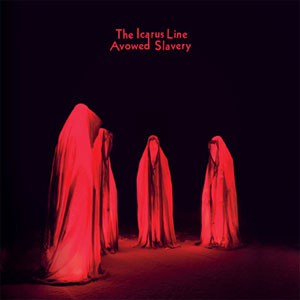 Hey, this aint no “follow up” number, this is a the other arm getting a shot; this is the Slave Vows era of the Icarus Line getting its I’s dotted. A sort of finality at play here, “Avowed Slavery” is the companion release to 2013’s well received SLAVE VOWS album, this completes the circle of fury.

With the video release of “City Job” at the end of 2013, and the Slave Vows album still making people talk, it was time to put these songs to wax, prepare the world for The Icarus Line's next move. Five tracks spread over the two sides, this mini album serves as aSlave Vows booster jab, the feral verocity of the last album is in spades here, maybe even more so, the fire in the band’s belly is roaring, and its only when the last track closes down do you realise quite fully, the impact.

Reference points take in a whole gamut of genres, styles, sounds, stances…… Cardamone leads the gang once more into the rough, the desecrated warzone that is the music industry, american culture and love , they (Cardamone, Hallet, De Guzman, Arnao) create their brand of “hellfire and brimstone” rock and roll…

Leeches and Seeds is a frenetic blast of noise with Hallets drums threatening to collapse your ears, driving you into live favourite Junkadelic. The bastard offspring of Clinton and Bargeld this grooves and slithers, winding its earworm abilities into your whole shuddering psyche…..

Raise Yer Crown closes off side one, with their LA swagger back in full effect, thump and grind from the Icarus Line, this is Los Angeles NOW…

Side two opens with the long awaited studio version of other live fave “Salem Slims”, first aired on the Killing Joke support tour in 2012, this fearless headrush is so adamantly an Icarus Line song, that theres no other comparison, howling stoogian vocal, building-destroying rhythms, shards of guitar gloss stunning all within range, this headrush of almost-insanity then moves into the last track, “The Father,. The Priest” , is this the calm after the storm, is this the comedown, is this the penance for the passion? Or is this the Vows era Icarus Line laying down tools to prepare for the next go?