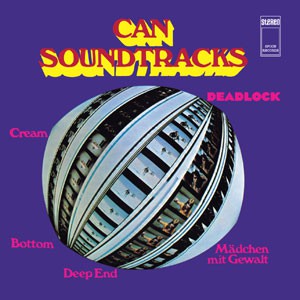 Soundtracks is a compilation album, first released in 1970, consisting of tracks written for film.

The album marks the departure of the band's original vocalist Malcolm Mooney, who sings on two tracks, to be replaced by new member Damo Suzuki.

"Don't Turn the Light On, Leave Me Alone" features Damo Suzuki's first recorded performance with Can.

Sara says: Every home should have at least one Can record and this one includes the full 14 1/2 minute version of Mother Sky, a krautrock epic.