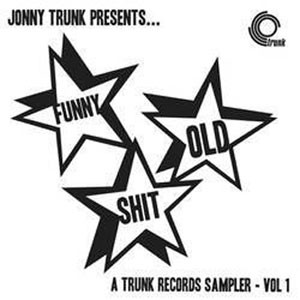 Jonny Trunk presents “Funny Old Shit”, a 17 track compilation of funny old shit from the Trunk archive. From calypsos sung by Bernard Cribbins and Robert Mitchum to avant-garde French concrete, with stops at post punk, killer vocal jazz, BBC Radiophonics, music from 'Les Vacances de M. Hulot', early African fusion, Argentinian film music and even some twitchy classical from Glenn Gould, this groundbreaking compilation flies in the face of the current trend for issuing records that to be honest are actually quite average and really very expensive indeed for what they are. This is a total bargain, an education and a right bloody laugh. Although some people will actually think it’s shit - but not us here at Piccadilly. We love ecclectic and we love oddball.

The Tracks: Bernard Cribbins is a god, so Bernard was a great place to start, and can you name any other song apart from “Gossip Calypso” featured here that manages to squeeze in the words “Oxy Acetylene welder”? No, I can’t either. This is followed by modern classical music played on strange sculptures by the prolific team of Jacques Lasry and Bernard Baschet, Their sound is reminiscent of film music by Cliff Martinez, and that’s maybe because Cliff has a Crystal Baschet sculptural instrument too. If you look on-line you can see him play it. Next we travel to Argentina for some lovely film music and then to an early fusion of Africa and America with Guy Warren and Red Garland getting all hip and proto rap. This is followed by a classic chunk of minimal modern music from 1981 by The Jellies. I’ve put this on the sampler as the record I made of it sold out ages ago and it’s expensive now and loads of people who missed it need to hear just how good it is. Next up is the B side from the first ever BBC Radiophonic Workshop record, which, incidentally was produced by George Martin. After this we can absorb some high culture with Noel Coward reciting Ogden Nash’s words written in 1949 to accompany the romantic classic masterpiece The Carnival Of The Animals, composed way back in 1886. We then move to a high point in low culture and to the world’s best worst singer, Leoni Anderson. She starred with Laurel And Hardy in one of their many films, and her one and only album is a terrifying delight. “Rats in My Room” also featured on Desert Island Disks in August 2013 when award winning film production designer Eve Stewart chose it as one her fave eight tracks.

As a lover of very fine vocal jazz too I had to throw in “Naima”, a staggering version of Coltrane’s classic. During a talk by Robert Wyatt a few years ago he revealed that he though this was one of the best bits of music ever made, and I agree with him. A small piece of educational electronics by Terry Dwyer (more about him in a forthcoming Trunk LP) makes quite a good little plugged-in interlude, which leads us nicely to the main theme for the Jacques Tati classic, Monsieur Hulot’s Holiday. Eccentric pianist Glenn Gould then appears with the beginning of his legendary Goldberg Variations recording, and then I realized I seem to be nudging towards interesting classical recording a bit, which I think is no bad thing. And before you know it, we’re back enjoying some proper experimental concrete tape larks.

Never one to resist a film star singing, I found it almost impossible to not stick in Robert Mitchum singing, and then I realized when I was writing these notes that that this was the second calypso-based record on this very small sampler, and then I thought that very fact might enhance the idea of the whole thing really being a bit “shit”. After Bob we can all enjoy a super rare recording issued to accompany the 1962 kitchen sink drama A Taste Of Honey. It’s a song that repeats throughout the film, amplifying the fact that Jimmy, Jo’s lover, has buggered off to sea. We finish with Yusef Lateef’s version of Alex North’s sublime “Love Theme” from the film Spartacus. It’s a perfect musical spot where an incredible film melody has met one of the great experimental jazzmen of all time. The results are quite exceptional. It’s also a cue that I often use at end of a long set, so for me it was the obvious choice for the last cue here.

So chums, that’s Funny Old Shit. The idea is to put together more of these samplers with friends, guest and other groovy collectors and to draw you in further to the funny old shit musical world that is Trunk Records. Thanks for listening.