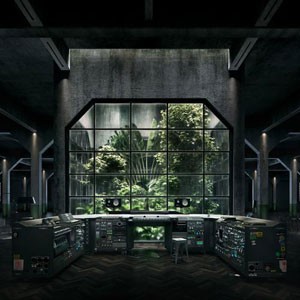 Now Night Slugs are pleased to announce an album of new material from the producer and labelhead; his first full work since 2011’s ‘Southside’ EP and its club anthem ‘Silo Pass’.

Expanding on a theme first started on the ‘MJT’ white label in 2012, this EP sees Bok create a replicant electro-funk, built with fragments of classics, arranged with a grime logic and weaponised with 2014 sub-weight.

The ‘Melba’s Call’ video is the setting for the entire EP, reverb from the bare concrete walls of the bunker-studio can be heard throughout. A central greenhouse is filled with a steamy jungle of corporate flora, unsettlingly hyper-real, like the warmth of the record’s sample material is being rendered bionic, pumped through military-grade equipment.

Running through the tracks is the influence of London’s futuristic millennial music - grime. The brutalism of alternating 8-bar structures is the DNA of Bok Bok’s productions. These tracks continue in the tradition of R&G (Rhythm & Grime) and its project to blend the soul of R&B with the potency of grime. Propelled by melody and at times almost sadistic in their repetition, the club tracks of the record play with pain and pleasure, while the two shorter ‘Greenhouse’ tracks allow brief moments of stillness.

And ‘Your Charizmatic Self’? It’s a reference to the source material and the exuberance of original live performances captured and automated. It’s also a message of charm and positivity, of self-realization.

Double LP in black paper inners in 5mm spine sleeve, with download card which features a bonus, digital only track.