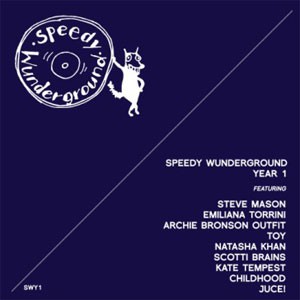 The record label Speedy Wunderground is the idea of producer Dan Carey, who has previously produced records for Franz Ferdinand, Bat For Lashes, The Kills, Steve Mason, Willy Mason, Django Django and TOY, to name a few.

The idea of Speedy Wunderground was to create something immediate, harking back to the golden age of rock and roll - where records were written, recorded and put out in a short space of time. All Speedy records are recorded and produced by Dan in one day, followed by mixing for one day, released on 7” single in limited runs of 250 as soon as is humanly possible.

Each record is recorded in Dan’s south London studio - the core of each song is a live take recorded in the dark with smoke and lasers.

‘Speedy Wunderground: Year 1’ is a collection of the first year’s singles along with the B-sides.