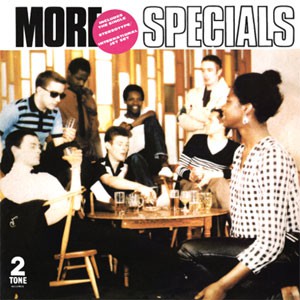 The Specials were formed in Coventry in 1977. True innovators, the band began the British ska revival craze, combining the highly danceable ska and rocksteady beat with punk’s energy and attitude.

The band’s second album ‘More Specials’ (UK No.5, 1980) was a change in musical direction to their debut. Less frenzied and hard-hitting, it was more musically adventurous and varied, bleaker lyrics reflecting British life at the time.

This album has been digitally remastered from the original analogue stereo masters and the new vinyl cuts have been made using those new masters. Careful comparison was made to the first pressed copies of the original albums throughout the process to maintain the sound as the band had originally envisaged.

The album features a classic cover of Carl Sigman and Conrad Magidson's 1940s chestnut ‘Enjoy Yourself’ and a brooding version of the same song featuring the Go-Go's.

Includes: the rhythm & blues / 60s soul-style instrumental ‘Sock It to 'Em JB’ and the Mexican-flavoured ‘Holiday Fortnight’; the intriguing ‘International Jet Set’; the apocalyptic ‘Man at C&A’; the mournful, spaghetti western feel of ‘Stereotypes’; the emotional despair of ‘Do Nothing’ and the bright and breezy ‘Hey, Little Rich Girl’ (with fabulous sax solos from Madness' Lee Thompson).

The immortal line from ‘Pearl's Cafe’ by Terry Hall and Bodysnatchers' Rhoda Dakar, sums up their own, and the country's frustration - ‘It's all a load of bollocks, and bollocks to it all’.