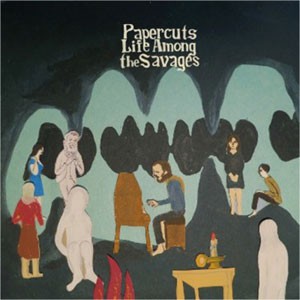 It’s a rare to come across an artist who’s equally skilled in songwriting, singing and production but lone-arranger Jason Quever, better known as San Francisco’s Papercuts, is a master of all trades. That the pocket-sized symphonies of brand new album ‘Life Among The Savages’ are set to see the light of day is through nothing but meticulous focus - due to his whizz-kid knack for instrumental arrangement, Quever often finds himself a sought-after musical collaborator.

As with each Papercuts album to date - 2004’s ‘Mockingbird’, 2007’s ‘Can’t Go Back’, 2009’s ‘You Can Have What You Want’, and 2011’s ‘Fading Parade’ - Quever recorded his latest offering on his Ampex 2” 16-track reel-to-reel in his home studio, Pan American, whittling the record down to its essentials over a two year period. It was there he worked alongside Port O’Brien, Beach House, Still Flyin’, The Skygreen Leopards, and most recently Galaxy 500’s Dean Wareham on their own recordings. “Galaxy 500 was a big influence on my music so it was very special to make a record with him that I’m really proud of,” says Quever. “More importantly, we had a great time doing it.”

Unassuming though ambitious, a life in demand was hardly of Quever’s expectations but such a skill set could never be kept secret for long. “I don’t want to hit people over the head. That’s just not who I am. I don’t necessarily like to be the centre of attention,” he’s often said. Yet ‘Life Among The Savages’ is about to do precisely that. The most concise and lucid Papercuts release to date, it demonstrates a uniquely fresh approach to classic instrumentation through shrewdly combining dreamy baroque pop string arrangements with lighter-than-air vocals via potent production work.

While Papercuts echoes bands like Spiritualized and The Zombies in mood, ambitious orchestration (the title track itself contains an arrangement contribution from Beach House’s Alex Scally) and the high-calibre dream pop of beautifully hypnotic tracks such as ‘Staring At the Bright Lights’, the sound on ‘Life Among The Savages’ is undeniably Quever’s own. Alongside haunting melodies that soar over strings, garagey guitar hooks, piano and mellotron, and energetic bass and drums that never rely on a clichéd beat, it’s impossible to refrain from being spellbound by Quever's unpredictable and chaotic world, whatever that may consist of.

“I like to write short stories, at least have the story in my mind and allude to it... from dystopian short stories to a utopian take on things, being outside looking in, alienation, search for bliss, the chaos of relationships, insanity, suicide...”

Having lost both of his parents and being orphaned at a young age before growing up on a commune, Quever is no stranger to the complexities life can bring. Crediting the four-track he got after his parents died with both helping him cope and inspiring his career, ‘Life Among The Savages’ is the next step in a musical trajectory that’s gently reshaping pop music in the way very few musicians know how.