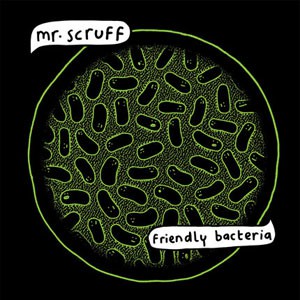 It’s a new Mr. Scruff album and you know what to expect, right? We widdle on about sexy potatoes and bouncy bacteria offering you a cup of tea, you have a little chuckle and actually make a brew, you stick on the album and… hold on. Because you see, quietly and without a lot of fuss (cos that’s not the way the Stockport Strepsil rolls) Mr. Scruff aka Andy Carthy has been evolving and developing his music.

So yeah, you can still count upon a shedload of gritty funk and stony soul (not sure where this metaphor’s going..?) but the new record displays a stripped back musicality, a depth that maybe hasn’t been there before. It’s been coming across his last few releases, but this is the most complete, sustained exploration of where his music is at right now. In Carthy’s own pithy words it’s “tougher, sparser, less samples, more bass. More vocals and collaborations and shorter tunes.”

If this record proves anything, it’s that there’s more, much more to the work of Andy Carthy than dancefloor grooves and funny cartoons.

Don’t worry though - it is still one sexy potato.