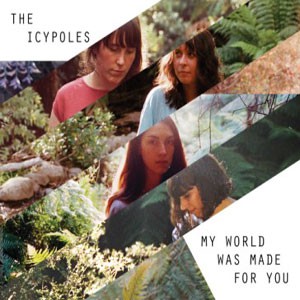 The Icypoles grew out of a soundtrack to an experimental film. During the recording Isobel Knowles discovered a love for 60s girl group garage bands and film music that creates a particular dark ambience. She started the band with her best friends Tara Shackell and Kim White and together they became The Icypoles.

Tara and Isobel were invited to join Architecture In Helsinki soon after The Icypoles started playing to audiences and there was a long pause in the development of the band while AIH toured the globe. However, the idea stayed strong and more songs showed their faces over the years.

The time came to take The Icypoles more seriously. The band found a new drummer, Lani Sommer, and together went into the recording studio (a kitchen in a temporary house). The recordings were interspersed with shows around Melbourne and small tours (Sydney, Stockholm and New York City!). A cassette came out in London with Sexbeat zine in 2010. UK label Kooky Discs invited the Icypoles to release a limited edition 7” in 2011.

Then came a more serious stint in the recording studio with producer Haima Marriott (Architecture In Helsinki, Still Flyin’) and the mixing process began. Isobel and Haima had worked together on those first soundtrack recordings and revisited their recording experiments.