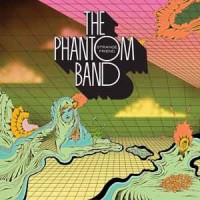 Musically Strange Friend is the most straight-up set of recordings the band have put to wax. Fans of their previous critically-acclaimed albums, fear not; those burbling, fluttering electronics that drag their sound through a wormhole and out into the 70’s alongside the soundtracks of John Carpenter and the kosmische of Kraftwerk and Neu! remain; the elements of folk; the woozy organ sounds. The difference is now it feels as though an imaginary thread’s been pulled tight through it all; take Strange Friend's driving opening track and first single, ‘The Wind That Cried The World'.

Singer Rick Redbeard on the song "The verses have a kind of nursery rhyme musical naivety and we wanted the choruses to just sort of blast in. The lyrics were kind of stream of consciousness that alludes somewhat to the inherent meaninglessness and randomness of artistic creation. The whole track acts as a nice opener and first single; a sort of a statement of intent after being away for so long."

Strange Friend, like their previous outings, is the sound of six clearly distinct personalities attempting to inflict their will on the rest of the group – it’s no surprise the phrase “love/hate” is brought up repeatedly by all its members in an attempt to describe their relationship with the band as an entity – but it’s that fission between each other’s contributions that provides the intangible individuality of their music. “Like all true utopias it can feel impossible to maintain,” admits guitarist Duncan Marquiss. “But we'd have fallen apart long ago if any one band member took the reins, and that friction between people throws up music that no single person in the band would have imagined otherwise. I still hope our utopia will turn into whisky fountains and flying sandwiches.” It’s something that you can’t help but feel would be fully deserved for these most strange but wonderful returning friends.

Laura says: There’s always the danger that when six people with disparate influences come together to make music , the songs can get pulled in so many different directions that they come apart at the seams. The Phantoms have the knack of grabbing all these threads and weaving (tangling?) them into inventive near perfect pop songs. The band have already demonstrated this on their previous two albums, but now after a four year gap they’ve returned with possibly their most cohesive album so far. The metronomic bass and drums power through or drop down to suit the mood as guitars chime and riff in equal measure. Spacey analogue synth swirls add an other-worldy feel, and a whole cacophony of percussion embellish proceedings. At times this combination creates an almost euphoric feel while at others Rick’s rich folk-tinged vocals add a sense of gravity. It’s been a long time coming, but well worth the wait!