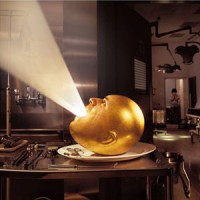 De-Loused in the Comatorium is the debut full-length studio album by American progressive rock band The Mars Volta and was originally released in 2003. Based on a short story written by lead singer Cedric Bixler-Zavala and sound manipulation artist Jeremy Michael Ward, the concept album is an hour-long tale of Cerpin Taxt, a man who enters a week-long coma after overdosing on a mixture of morphine and rat poison.

The title of the album is taken from the lyrics of the song “Eunuch Provocateur”, which is included on the band’s debut EP, Tremulant. The cover artwork is by Storm Thorgerson, who also designed the artwork for the album Frances the Mute. The album is co-produced by Rick Rubin and The Mars Volta guitarist Omar Rodriguez-Lopez. As Eva Gardner, the original bassist, parted ways with the band, Red Hot Chili Peppers bassist Flea is featured at bass guitar player on the album.

The vinyl edition of the album was only released in the US in limited quantities and is a much wanted vinyl piece. Music On Vinyl is proud to reissue the album and to celebrate its release the first 3.500 copies are individually numbered and pressed on gold vinyl.

SIDE A
1. Son Et Lumiere
2. Inertiatic ESP
3. Roulette Dares (The Haunt Of)

SIDE B
1. Tira Me A Las Arañas
2. Drunkship Of Lanterns
3. Eriatarka

SIDE C
1. Cicatriz ESP
2. This Apparatus Must Be Unearthed

The Mars VoltaDe-Loused In The Comatorium

The Mars VoltaFrances The Mute