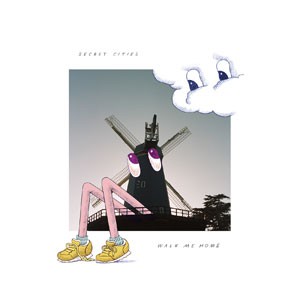 In the wake of their 2011 album "Strange Hearts", the three members of Secret Cities branched off in different directions. Charlie Gokey delved into Roy Orbison's ballads about losers in love while becoming a civil liberties attorney in Washington, D.C. Alex Abnos locked in to New Orleans soul masters like King Floyd & Dr. John as he became a journalist in New York City. And Marie Parker became a teacher in the band's spiritual home of Fargo, North Dakota.

Having met at band camp and on an internet message board, the trio had made music together for nine years without ever living together in the same city. After recording two albums and a handful of singles via email, they decided it was finally time to enter a real studio where they could play and record together in real time. They chose San Francisco's Tiny Telephone studio, where Jay Pellicci manned the controls for a week-and-a-half of the most spontaneous, democratic, and visceral recording of their lives. They emerged with Walk Me Home, an album that finally reflects their live chemistry and their diverging lives and musical tastes.

"The bass is dewey. The harmonies are starlit. The theremin is ripe…The racket they're able to muster together in the process is enough to set them apart from the pack." PITCHFORK.