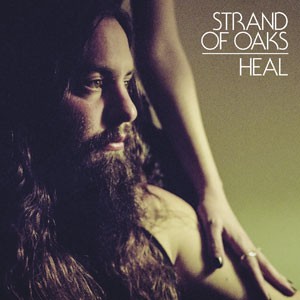 From the first bars of ‘Heal’, the exhilarating melodic stomp of ‘Goshen ‘97’ puts you right into Tim Showalter’s fervent teenage mindset. We find him in his family’s basement den in Goshen, IN, feeling alienated but even at 15 years old believing in the alchemy and power of music to heal your troubles. “The record is called ‘Heal’ but it’s not a soft, gentle healing, it’s like scream therapy, a command, because I ripped out my subconscious, looked through it, and saw the worst parts. And that’s how I got better.” ‘Heal’ embodies that feeling of catharsis and rebirth, desperation and euphoria, confusion and clarity. It is deeply personal and unwittingly anthemic.

Showalter was on tour, walking home on a mild autumn night in Malmo, Sweden, when he first felt the weight of the personal crisis that would ignite him to write ‘Heal’. “It was a culmination of pressure,” Showalter recalls. “My marriage was suffering, I’d released a record I was disappointed in, I didn’t like how I looked or acted… so I’d gone on tour, I was gone about two years! I didn’t take time to think about failure, but I knew I was going deeper and deeper…I was thinking, I have this life, but it’s not my life, I haven’t done it right…” When Showalter returned, he wrote 30 songs in three weeks, a process that proved difficult but cathartic and at times invigorating. Previous Strand Of Oaks records were more skeletal, raw examples of folk-rooted Americana with occasional rock and electronic currents that have now come to the fore.

‘Heal’ is a bold new beginning, with a thrilling full-tilt sound that draws on Showalter’s love of 70s, 80s and 90s rock and pop, with the singer and guitarist playing the intense valedictory confessor.

Crucial to ‘Heal’s sound was the man who Showalter chose to mix the record, the stellar alt-rock icon John Congleton. Showalter also re-connected with Ben Vehorn, synth expert and studio engineer extraordinaire and drummer Steve Clements, who provides ‘Heal’s thunderous, sinewy drive. Songs such as ‘Shut In’, ‘Plymouth’ and ‘Woke Up To The Light’ have a classic construction and mood, recalling 70s powerpop / ballads and the yearning ache of Big Star’s late, great Chris Bell.

Many of the songs on ‘Heal’ reveal an electronic undercarriage and towering drums that push the album’s wired dynamic to its stretching point, especially on ‘For Me’, which expertly bridges the album’s twin decades of influences. If ‘Goshen ‘97’ recalls the molten energy of Dinosaur Jr, that’s because it actually is J Mascis on lead guitar. Despite the initials, the album’s smouldering 7-minute epic ‘JM’ is not a Mascis tribute but one to the late Jason Molina, about having his music as comfort no matter how bad things get.