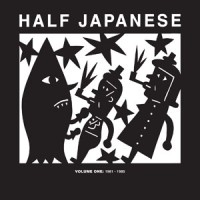 Fire records followed up the deluxe reissue of Half Japanese’s first album ‘Half Gentlemen Not Beasts’ for last year’s Record Store Day with another deluxe reissue. The first of 4 volumes containing 3 vinyl LPs of the next set of Half Japanese albums is now also available on a 3CD package.

This first volume starts with 1981’s ‘Loud’ and also includes ‘Our Solar System’ and ‘Sing No Evil’ to bring them through to 1985. New artwork from Jad Fair adorns the outer sleeve, which also contains a booklet with liner notes by Jad and David. Half Japanese were formed in 1974 by brothers Jad and David Fair. Despite being lifelong music obsessives, their approach to the craft of writing and the art of performing was utterly unique. Heavily inspired by Jackson Pollock, Half Japanese were always more of an art project than a musical journey. More important than technical ability, was enthusiasm and a thirst for creation. They eschewed traditional ways of playing to explore different tunings, allowing them to coax new sounds from their instruments. Their first release, a seven inch, EP called Calling All Girls was more of an art project than a business venture, with nine songs, a poster with inserts and a printed cover. They never really expected it to sell, but much to their surprise distributors quickly gobbled up all 500 copies, so they rushed to repress 500 more and began making plans for a second record. It was well and truly a calling card.

Fire Records continues their Half Japanese reissue campaign by bringing you the next three albums in the set, collected as Half Japanese: 1981-1985. In recording the follow-up, entitled appropriately as Loud, the band came into their classic line-up. Consisting of Jad and David Fair, as well as two Saxophonists; John Dreyfuss and Lana Zabko, and guitarist Mark Jickling, with Rick Dreyfuss on drums. Creating a barrage of enthusiasm and manic energy around rock and roll teen anthems and free jazz skronk, the band were well on their way to carving out a unique legacy. Our Solar System would bring further joys as they continue to focus on simple themes of love and romance and dancing with girls amongst the experimental noises sneaking out in the music, creating a soundtrack for a sock hop in an alternate universe. The album also featured covers of Buddy Holly, The Velvet Underground, Chuck Berry and Roky Erickson.

Their approach to covers is explained by David Fair: “We have covered many songs but never with the idea in mind of having it sound like the original. In fact, we often took only the words and made no effort, whatsoever, to recreate the melody.” On Sing No Evil, Half Japanese truly came into their own, with their DIY roots blending with free jazz touches to create a raucous indie rock classic. Containing songs like "Firecracker Firecracker" that remain set highlights even today, the band had established a voice like no other. This would be the last record with David in the core line-up, and all of the early records bear his powerful arty and experimental streak. Where would the future take Half Japanese with Jad at the helm? You will have to wait for Half Japanese: 1987-1989 to see.