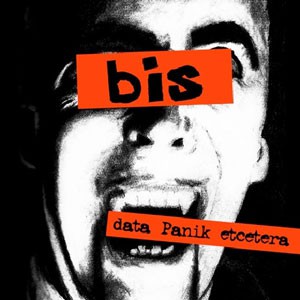 Record Label
Do Yourself In

The influential and ever underrated Glasgow, Scotland trio return with "data Panik etcetera" - a release that brings us up to date with recordings from the year spent re-branded at data Panik, alongside other aborted attempts to record a 4th, and definitive, bis album. Hardcore fans have been desperate to get their hands on these recordings, and the band have carefully selected and remastered the pick of the bunch - which sit neatly together to create a cohesive whole. The band have still been playing storming sets live over the last few years, surprising punters at places such as Primavera in Barcelona and 2013's Indietracks Festival as headliner and new material has crept into the set-list. Consider this a friendly catch-up before bis begin again where they left off. Manda Rin, Sci-Fi Steven and John Disco, to give them their professional monikers, were big in the late 1990's for such highlights as being the first unsigned band on Top Of The Pops (allegedly), creating the theme tune to the massive Hanna-Barbera cartoon "The Powerpuff Girls", having their own Casio G-Shock watch released in Japan and moving from their punk-rock roots to have a huge underground European dance hit with "Eurodisco". Taking influences from Devo, XTC, Huggy Bear, Bikini Kill and The Plastics, bis have also inspired other for 20 years now - being a reference point for a host of artists such as CSS, Los Campesinos!, Joanna Gruesome and Chvrches. The band also featured in NME's list of Top 20 Cult Heroes and featured in their Top 50 Britpop anthems. Albums "The New Transistor Heroes" (Under-fi pop/punk songs with twitches into disco, hip-hop and synth-pop), "Social Dancing" (Glossy electro-pop that somehow failed to take the world by storm) and "Return To Central" (An expansive rebirth, taking in Eno, Moroder and Can like a bunch of hipsters - sales negligible) showcased the over-development of their creators, always keen to move onto the next project. With "data Panik etcetera" the inspirations had moved onto strict, skinny-tie, new-wave pop songs (Control The Radical, Minimum Wage, Retail of the Details), awkward XTC play Chic disco (Cubis (I Love You), Music Lovers, Too Much Not Enough) and disconcerting Goth-Techno (Sense Not Sense, Flesh Remover). Rulers and the States, meanwhile, has already featured heavily on a Scottish Television advert with it's nagging Sparksy riff. Released by Do Yourself In, "data Panik etcetera" comes in vinyl format (180g white vinyl).