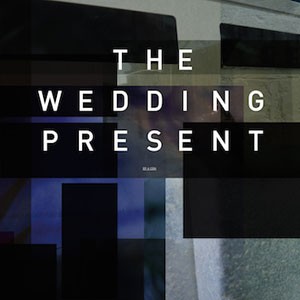 The Wedding Present’s 'Record Store Day' releases seem to have become something of a little obsession for David Gedge. The yearly 10” EPs make him little profit; he just gets the satisfaction of singing and recording in other languages… and producing Extremely collectable records. In 2012 he tried his tongue at French and 2013 brought us his Teutonic warblings. This year, he’s really gone all out… this 10” vinyl only release has been sung in Welsh! A big fan of Wales and the Welsh in general, David doesn’t actually speak the language, but this didn’t stop him. He called in renowned Welsh actor, Andrew Teilo, who translated and created demos of four existing Wedding Present songs. David then travelled to Penarth where he and Andrew recorded the vocals with some recording expertise from Arwyn Davies. They kept the Welshness going with a little help from Andrew's fellow actor, Llinor ap Gwynedd, on backing vocals. The songs [recorded in the same session as the recent album, ‘Valentina’] are different from the songs on the other two ‘language’ EPs from Record Store Days past… and include the charming ‘Valentina’ album track ‘Meet Cute’. There were a few little hiccoughs during the translation from English into Welsh… the first song, 1000 Fahrenheit, had to be translated into Welsh as 10,000 (Deng Mil) Fahrenheit... not because there is no word for 1000, but apparently it just sounded better! Perhaps the songs all sound better in Welsh! All Welsh album next time Mr. Gedge?! The band will be promoting the release of ‘EP 4 Cân’ with a performance at the 'Wales Goes Pop’ festival in Cardiff during the evening of April 19 following an acoustic set at Spiller’s Records during the afternoon.

The Wedding PresentLocked Down & Stripped Back