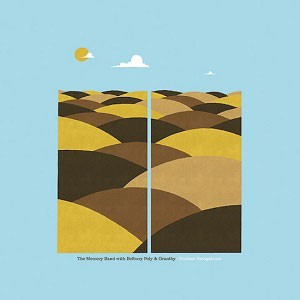 The Further Navigations EP is a continuation of the themes which informed The Memory Band album On The Chalk (Our Navigation Of The Line Of The Downs) also released on Static Caravan. Featuring remixes from Belbury Poly and Grantby and a brand new Memory Band track the EP draws inspiration from the ancient "lost road" that is the Harrow Way. The choice of collaborators are two producers who have had a profound impact on The Memory Band sound in different ways, but both bring to the fore the cinematic elements of Stephen Cracknell's approach to traditional music. In the decade since The Memory Band began one of its greatest contemporary influences has been the fine collection of work released by the Ghost Box label, in particular the Belbury Poly aka label boss Jim Jupp. Spectral, haunting and yet vibrant and knowing his work has established Jupp as a truly English original, making some of the essential electronic music of the new century. For "Hobby Horse" Belbury Poly takes the blueprint from the Memory Band's version of the traditional funeral march "When I Was On Horseback" transforms it by speeding it up, flicking the swing setting and produces something that sounds like David Munrow making music for schools on analogue synthesisers. Grantby aka Dan Grigson has a mysterious history, famed for the Timber EP and tracks for labels such as Mo-Wax in the mid ‘90s, his work defined and exceeded trip-hop and garnered a loyal international underground following who spoke of him as an English version of DJ Shadow. Memory Band leader Stephen Cracknell worked alongside Grigson on a one or two of those early recordings and when Grigson withdrew from music after an ill-starred move to Creation Records, Cracknell moved to focus on his own projects which lead to The Memory Band. Recently Grigson returned to music, working on music for film and television music before returning to remixes and production. Here Grantby takes the traditional ballad "As I Walked over Salisbury Plain" leads it into the military zone and the result is "The Ballad Of Imber Down" named after the "lost village" of Imber upon Salisbury Plain, from which its inhabitants were evacuated by the Army during the Second World War only to learn that after the War that it had been decided the village would remain the property of the military and that they could never return again. Their ultimately doomed campaign to return has itself passed into legend.The Memory Band original "Walk Along It" is a hymn to majesty of walking in the open air. It borrows heavily from the anonymous and haunting version of the traditional English tune The Lincolnshire Poacher, broadcast from a shortwave numbers station and believed to be operated by the British secret services.

The Memory BandOh My Days