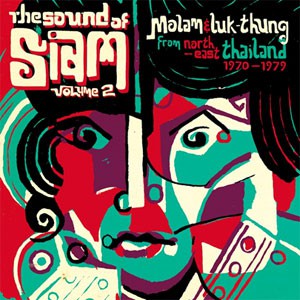 In this second volume of 'The Sound of Siam' the focus is firmly on the music the sounds of north-east Thailand, or Isan and attempts to show how a genre evolved and developed from essentially an acoustic tradition with specific geographic roots, to one that started to incorporate other instruments and influences that reached out to the Isan diaspora around the country.

The term molam is actually two separate words pushed together: Mo meaning ‘expert’ or ‘doctor’ and lam meaning ‘to sing’. Hence the literal translation means ‘singing expert’. Many molam records have extended intros that allow a vocalist to establish the theme of the song, as well as flex their improvisational muscles.

Luk Thung (literally ‘song of the countryside’) is a much broader, rural style that had a bigger impact nationally. Artists like Saksiam Petchompu began fusing this style with molam, a move which propelled him to national fame. You can hear the influence of western funk, as well as Thai arrangements, on the luk thung Isan (as the hybrid became known) smash Jeb Jin Jeb Jai included here.

'The Sound of Siam 2 - Molam & Luk Thung Isan from North-East Thailand 1970 - 1982’ features 19 tracks, many appearing outside of Thailand for the first time. Both CD and double LP and is accompanied with detailed liner notes written by compilers Chris Menist and Maft Sai.