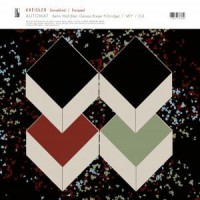 2014 sees the 20th anniversary of German electronic pioneers Kreidler. There'll be a tour, a movie by Heinz Emigholz and new album release “ABC” (which has been recorded in Tbilisi, Georgia). Featured here is an unreleased outtake from the album session. Jochen Arbeit, Achim Färber and Georg Zeitblom have been collaborating under the name Automat since the end of 2011. Their debut album will be available from 4th April 2014, featured here are three unreleased outtakes from the album. The song “Berlin Wall” is a collaboration with Throbbing Gristle’s & Psychic TV’s Genesis Breyer POrridge.