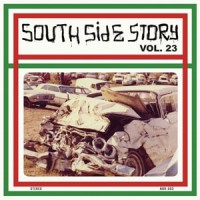 For the lowriders, the souleros, or just anyone with a still-working CD player in their hooptie and a penchant for driving with even a slight gangster lean. Numero pays tribute to the aftermarket sounds of “sweet” soul music still emanating from the West coast, or East Side, depending on your perspective. Inspired by, and paying tribute to the countless cruising compilations, legitimate and (mostly) otherwise, that provide the soundtrack for lowrider and soulero culture, South Side Story is the latest in the Numbero line of takes its aesthetics from the timeless East Side Story series, and its music from Chicago soul groups (mostly, of course, from our mythic South Side). Included here are songs that are completely unreleased, others that are never before issued other than in minuscule pressings on 45, and a few chrome-coated classics, already seen on scads of flash-in-the-pan boots. The Numero Group’s crack team of researchers cut loose on the city of Chicago to assemble the perfect lowriding companion, and the results are unparalleled. From high school rivals The Si-Berians and The Intentions, who both feature their sole recordings here, to unheard material from the original Calvin Harris, to the elite Latino ensemble known as The Mystics, to the missing link in “sweet-as-sugar” Renaldo Domino’s lonely post-Twinight recording, this dazzling collection slices out a delectable cross-section of the city’s sweetest sounds. 13 perfect “souldies” as they are occasionally called, allowing you to throw away any of your many volumes of Gangster Soul Harmony, Lost Soul Oldies, East Side Story, Hood Dreams, Shady Side of Town (or any of the thousands of other similar iterations)