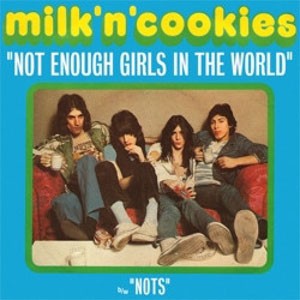 Milk n Cookies are the stuff of legends – or would be legends.

Forming in the early 70s on Long Island, NY this power pop group was originally signed to Island Records and seemed destined for greatness. Yet through many cases of wrong place wrong time the band never managed to break. The core line up of the band was made up of Ian North, Justin Stauss, Sal Maida and Mike Ruiz and in their time they played classic NYC venues like CBGB’s & Max’s Kansas City and shared bills with everyone from Talking Heads to The Ramones.

The band have amassed a cult following influencing the likes of Thurston Moore (Sonic Youth) and Debbie Harry (Blondie).

Consider this 7” a small taste of what’s to come from Captured Track’s deluxe 3xLP reissue.

Limited to 100 copies for the UK and Ireland.