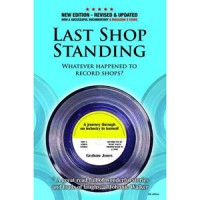 The book ‘Last Shop Standing: Whatever Happened to Record Shops?’ is the story of how the UK went from having over 2000 independent record shops in the 1980's to just 269 by 2009.

Graham Jones was in the perfect position to witness their sad decline from the van tage point of a record company salesman who has travelled the length and breadth of the UK to sell stock to these shops. As he watched the tragedy unfold he decided it was important that someone documented their tales before the record shop went the way of the stamp shop, the coin shop and the candlestick maker.

He set off on a tour of the UK to interview 50 record shop owners to see why they had survived whilst a couple of thousand others had closed. These interviews are the basis of the book. Graham thought he was writing the obituary of the record store but Last Shop Standing became a celebration of these great cultural meeting places: a David and Goliath tale of stores managing to keep going despite the immense pressure from downloading and supermarkets.

In 2012 Last Shop Standing was made into a successful film featuring Johnny Marr, Norman Cook, Richard Hawley, Paul Weller, Billy Bragg and lots of record shop owners from the book. The film has been screened all over the world and the DVD was the official film of Record Store Day 2013.

Recently, record shops have made an astounding comeback and we now have more record shops than back in 2009. This updated sixth edition of Last Shop Standing explains why. This edition also gives a comprehensive
update on the original shops interviewed. Last Shop Standing has become a piece of social history. It is also a damn good laugh.

Graham JonesThe Vinyl Revival And The Shops That Made It Happen