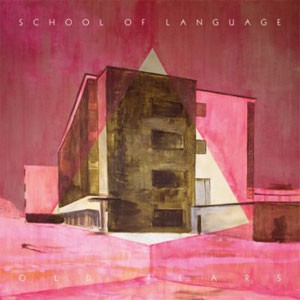 The new School Of Language album is called ‘Old Fears’ and it’s set for release on Memphis Industries.

‘Old Fears’ is a pop record. A place of clipped falsetto, melancholic funk, iridescent electro, shimmering post-punk, futurist prog. A self-contained sphere of strange sensations. Beguiling textures. Lengthening shadows. At times it is both liminal and minimal, at others emotive and external. Ambiguous and ambient. Tantalising and tempered. Modern. Unique. And funny too. “I wrote a lot of notes and they seemed to distinctly split into things to do with love and things to do with fear,” says School Of Language’s David Brewis. “A lot of it has ended up with me looking back at when I was 19, 20 - my formative years. So though I wouldn’t want to call it a concept album it’s definitely themed.”

Here each song has been honed and polished into something pure, like a vast block of marble chiselled down into a perfectly tiny delicate egg of Fabergé-esque perfection. Recorded throughout 2013 in Field Music’s studio on the banks of the River Wear in Sunderland, synth flourishes sit alongside the staccato jarring guitars of ‘A Smile Cracks’ and the metronomic rhythms of ‘Dress Up’. Like a Ballard novel or a George Shaw painting, ‘Between The Suburbs’ offers perhaps the most lyrical and poetic moment, where “Dogs chase patterns, play to attention / Bulbs glare on greasy roads...”

The title track, meanwhile, is reminiscent of the haunting Giallo film scores of Goblin or Kosmische music at its most moving, while ‘Moment Of Doubt’ displays shades of Brian Eno and Robert Wyatt. Other oblique influences come in the form of early Justin Timberlake and N*E*R*D albums, “a bunch of disco records”, Canadian experimentalist Sandro Perri, Dr John, Fela Kuti and Shalamar.

School Of Language is the nom de plume of David Brewis, a member of Mercury prize-nominated pop group Field Music. His first album as School Of Language, ‘Sea From Shore’, was released to wide acclaim in 2008. A pop polymath, the past twelve months have also seen David assemble and play in Eleanor Friedberger’s touring band, do production work for Maximo Park, Futureheads affiliates Rivals, Pea Sea and a collaboration between brother Peter Brewis and Paul Smith, as well as remixes for Dutch Uncles, The Ralfe Band and Phoenix Foundation.