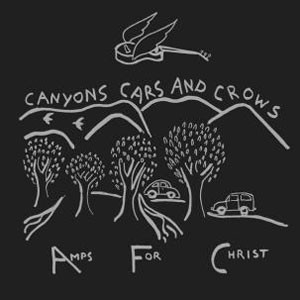 Coming seven years after the release of the previous full-length record, Every Eleven Seconds (5 Rue Christine), and two since the their split LP with Woods (Shrimper), Canyons Cars and Crows is a proper resurrection for Amps for Christ. Recorded at Equation Road in the beautiful Pomona Valley, the record upholds the band’s traditions of mixing folk with hardcore and noise with music—known as folkcore and musnik, respectively— and covers familiar sonic territories from ragas and Basho folk to dirges and jigs. The songs, dire but hopeful, examine man’s relationship to nature.

Henry Barnes, the force behind Amps for Christ, was a founding member of Man Is the Bastard. The group’s first release was the cassette-only album The Plains of Alluvial, released by Shrimper in 1997; since then there have been many full-length and split albums on a number of labels. Outside of Amps for Christ, Barnes has collaborated recently with Man Is the Bastard’s Eric Wood on a Bastard Noise / Brutal Truth split LP on Relapse Records, a split with Bizarre Uproar, and a pair of splits with Japanese artists Outermost and Government Alpha. Look for live shows across one or two oceans following the release of Canyons Cars and Crows.