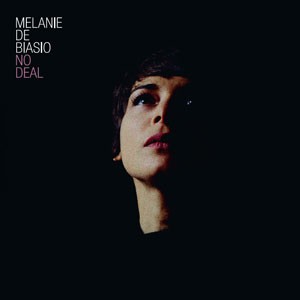 'No Deal' is the new album from Melanie de Biasio. Album of the week recently on Gilles Peterson’s BBC 6 Music show, 'No Deal' has already achieved Gold status in her native Belgium, and is approaching Silver in France.

Originally from Charleroi and currently based in Brussels, De Biasio is a classically trained flautist and the possessor of an extraordinary voice - she has been called the Belgian Billie Holiday. The minimalist, semi-improvised 'No Deal' will reward any music-lover willing to take the time to immerse themselves in its subtle splendour. The album should appeal to fans of late-period Talk Talk, who’s Mark Hollis is a huge figure for De Biasio. She also cites Frank Zappa and Pink Floyd as formative influences, plus Nina Simone and Abbey Lincoln, two icons of the civic rights fight and spokeswomen of an aggressive jazz stripped of any affectation.

'No Deal' comes in at 33 and a third minutes and contains just seven songs, through which De Biasio’s voice drifts gracefully, at times disappearing altogether. With Pascal Paulus on keyboards, Pascal Mohy on piano, and Dre Pallemaerts on drums, De Biasio has streamlined everything to give more space to her extraordinary vocals. There is a natural flow to the album, from the intimate beginnings of 'I Feel You' to the farewell note of 'With All My Love'. The final song intimates the reconciliatory, redemptive powers of song, the calm after the storm, yet bristling with emotion, a ‘frisson‘, as they say in French. Rarely has a record unfurled as many dark beauties and hidden luminescence, speaking a thousand musical languages while remaining completely accessible.