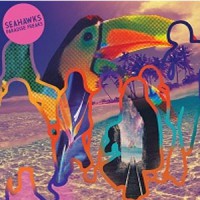 Seahawks have been a ‘best kept secret’ since 2009. Having got together to create their own particular style of ‘cosmic music’ back then, the duo of Jon Tye and Pete Fowler have released a seemingly unstoppable wave of music on limited edition vinyl in hand printed sleeves, cassette, picture disc and even mini disc. Seahawks have remixed artists including The Horrors, Badly Drawn Boy, Tim Burgess, Rune Lindbaek and The Advisory Circle. They host a regular ‘boat party’ in London where guests Ulrich Schnauss, Tom Furse et al are free to play whatever the hell they like. Their few live shows have taken place in London, Manchester and Japan.

Seahawks were formed when Jon Tye invited Pete Fowler to spin some discs with him at a party. While playing, they discovered they both loved the seemingly incompatible genres of free electronic noise and smooth AOR soft rock. It was the fusion of these two disparate elements that lead to the first Seahawks release ‘Omega Beach’, a record that fused Oneohtrix Point Never’s tripped out synths with Don Henley’s Deadhead quoting anthem ‘Boy’s Of Summer’. Subsequent releases have explored all manner of West Coast/soft rock sounds mixed with sprawling freeform improvisations to create deep listening epics like ‘Spaceships Over Topanga Canyon’ and ‘Tender Abyss’.

In 2011 Seahawks were offered some free studio time. Faced with a room full of drums, guitars and keyboards, the duo called on some fellow travellers to help create the sound they’d been hearing in their heads for so long. The result is ‘Paradise Freaks’. While some tracks even resemble conventional songs, others stretch right out and explore the far reaches of the universe. It’s the kind of record Jonathan Wilson might have made if he’d grown up listening to Cluster, Cerrone and Jerry Garcia or if Connan Mockasin had ended up on stage jamming with a prime time Doobie Brothers.

Recording with a core group featuring Al Doyle (Hot Chip / LCD Soundsystem) on bass and guitar Rob Smoughton (Hot Chip / Grovesnor) on drums and guitar and Kenny Dickenson (KT Tunstall / Red Ken) on keys, Seahawks invited some of their favourite singers to contribute vocals. Maria Minerva, Tim Burgess, Indra Dunis of Peaking Lights and missing-in-action psychedelic songsmith Nick Nicely all added their unmistakeable tones. A set of final overdubs from Tom Furse (The Horrors) and some tinkering from Seahawks’ regular Cornish musical mates sealed the deal. The whole process took time but what is time when faced with the epic expanse of the cosmos - a cosmos full of soft tones and brilliant corners, unexpected collisions, warm openings, deep colours and fresh textures.