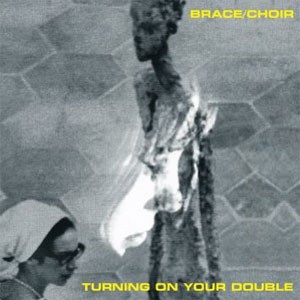 With their follow-up to 2010’s self-titled EP, Brace/Choir have made an LP of idiosyncratic Trancerock geared towards the listener of whole albums. At its core, Turning on Your Double is a series of dark and ecstatic tales of mental illness, written and recorded in Berlin, Germany amidst tectonic shifts both personal and political. The eight songs are a meditation on social and individual struggles with compulsive disorders, power and inverted schizophrenia: four people united by an idealistic vision of collaboration who come to think they’re one - and the cracks that show in their lives and personalities when the music stops.

Multi-instrumentalists Alex Samuels, Max Gassman, Cristoph Adrian and Dave Youssef have committed to switching instruments and writing each other’s lyrics in order to allow each instrument to speak with multiple voices and each voice to speak from the depths of multiple psyches. Or is it one? The sound is a shifting and shadowy amalgam of treated hollow body guitars, Farfisa organ, various synthesizers (Roland Alpha Juno 1, MFB Synth 2), percussion, and drums. Themes such as cuckoldry ('Be Let Down'), satanic fiction ('Biond'), technology-related neuroses ('Coil'), and the killing of Osama bin Laden ('Fallmen') are unveiled through a combination of rapturous improvisation and sublime songwriting, while 'Five Fngered Leaf' showcases a powerful reworking of the Arseny Tarkovsky poem 'But There Has To Be More', as featured in Andrei Tarkovsky’s classic film Stalker.