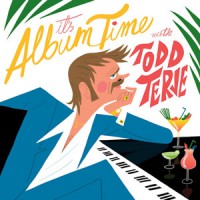 What time is it Mr. Terje? “It’s Album Time”. Indeed it is. In the course of the last decade, Terje Olsen has ascended from trainee astrophysicist, acclaimed balloon artist and occasional cocktail critic to be crowned Prince of Norse Disco, without even having to release an LP. His exceptional “Eurodans” on Full Pupp announced his arrival on the beardo disco scene, and killer remixes of the likes of Lindstrom, Antena and Studio made it clear he wasn’t a one hit wonder. Next came the slew of classy disco edits, which spread across the web like a low bitrate fire, saving many a DJs life in the process, and soundtracking every decent bar in the Western World for about five years. Since then our Todd has risen to the top of the disco world with a string of flawless original productions which have dominated end of year charts in recent years.

And so now we come to his debut full length, which sees Terje taking a step away from the club to offer a refined home listening experience. The producer marries the louche charm of exotica with a synthesizer obsession, pairs Latin rhythms with Fjord melodies and does it all with a great sense of humour. Old classics “Inspector Norse”, “Swingstar” and “Strandbar” all feature, with the latter segueing beautifully into the rampant Carpenter-esque “Delorean Dynamite”, lending their expansive melodies and driving pulse to the record. Elsewhere, “Leisure Suit Preben”, “Preben Goes To Acapulco”, “Svensk Sas” and “Alfonso Muskedunder” take us on jazzy diversions into an alternate reality of 60s hula bars, with scatting vocals and meandering solos. The hotly anticipated Bryan Ferry collaboration, a cover of Robert Palmer’s “Johnny and Mary” is the only vocal cut on the LP and provides a moment of sentimental beauty as the Roxy Music man’s vocals sit perfectly on Terje’s arpeggiating synths. Mr Olsen has given us that rare gift, an electronic music LP which works perfectly as home listening, and comes fully realised as the complete package; “It’s Album Time” more than lives up to expectations.