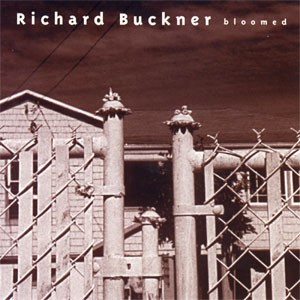 Spin magazine described Buckner as “equal parts Bay Area bohemian and dust bowl traditionalist” and named Bloomed one of its best albums of 1994, while Pitchfork wrote, “It’s a traditional outsider-country record in the lineage of Townes Van Zandt. Buckner’s voice is all honey and oak, his guitar style elaborately twanging, his constant subject matter heartache.” Richard Buckner provides some background on the album: Bloomed was originally (erroneously?) released on an unnamable German label in 1994. I was living in San Francisco at the time, having just moved out of a residential hotel and into the 1906 hilltop prefab that adorns the cover. At the time, I was heading a band called The Doubters. We were playing high profile events such as The Covered Wagon Saloon’s Musical Barstools, but weren’t making much headway. We had been turned down consistently every year by SXSW, but I was somehow finagled in as an unannounced guest onto an already unofficial SXSW showcase created by Butch Hancock at his gallery in downtown Austin. There, I met up again with Lloyd Maines, who agreed to produce my first record. Maines and I met in Lubbock, TX, a few months later, where we worked with Lubbock musicians in a small recording studio walled in wooden shingles Sharpied with bible passages from various church groups that also enjoyed working there. It was 112°F the morning I arrived under the suspicious (Californians are merely B-grade yankees) gaze of downtown’s Buddy Holly statue. That first night there, it hailed so hard that heaven’s angry pellets were storming in under my motel door. It only let up for a few moments that first night, allowing me to run across the street to get a butter burger and fries to go. We finished four days later and I flew back to San Francisco, dismembered the band, and embarked on a tour that would last about 20 years (or a few days, if you count what I actually remember). Nothing’s changed. I’m still dodging the sky and busking to strangers.